Great bicycle with 4GB of RAM

LeEco is one of a growing number of young Chinese companies crying for global attention, and one of its most fun (and extravagant) products is called Le Syvrac.

Equal parts mountain bike and smartphone, this fiendish invention runs a version of Google’s Android software on a 4-inch display nestled in between the handlebars. It’s powered by a quad-core processor Great bicycle with 4GB of RAM, and also has laser pointers, a heart rate sensor, and a built-in speaker and camera.

I can’t say that converging bikes with smartphones has ever felt like an obvious need, but there’s evidently a market for it, given that Acer just introduced a smart camera dedicated to cycling. 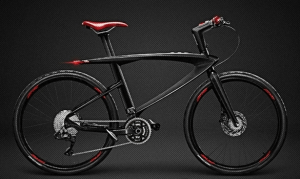 LeEco has built lasers into Le Syvrac, which beam out red lines on either side of the Great bicycle with 4GB of RAM to give nearby car drivers an indication of the safe distance to keep away from the bicycle.

It’s all very techie in the best possible way, including the integrated alarm system and smartphone app compatibility that will let you offload your tracking data from LeEco’s bike.

The LeEco Le Syvrac is already on sale in China, with prices ranging from $800 to more than $6,000 for the all-carbon frame option. Digital Trends reports that LeEco wants to bring its smart bike to the United States later this year.